Cathy is a friend of mine that I have had the pleasure of learning from.  She has overcome something major in her life and I wanted to share her story with you as I find it very inspiring.  When you are struggling with health on any level read this article as it may help you take charge of your life! 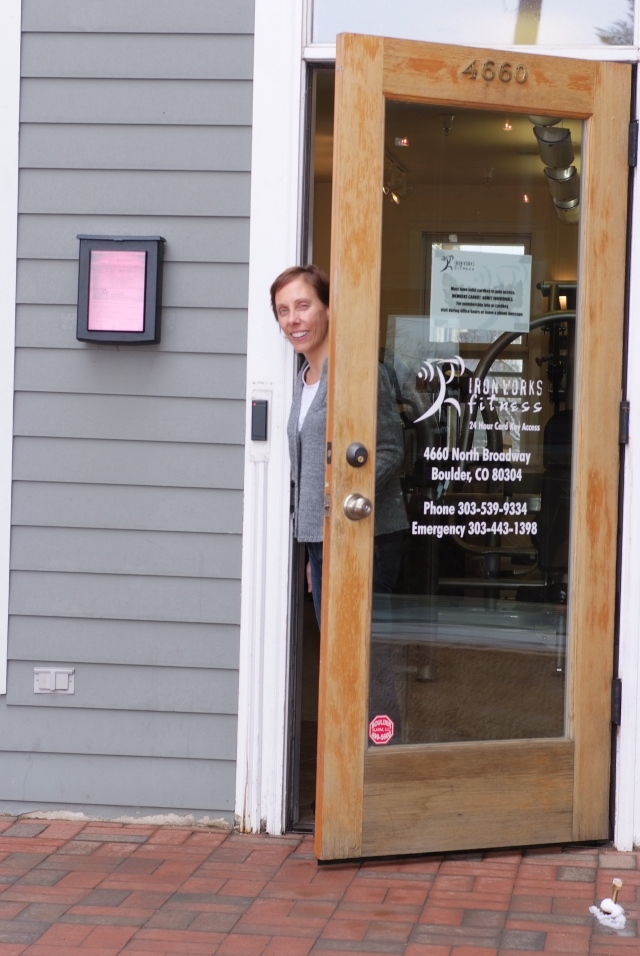 The first thing members encounter when entering Iron Works Fitness during the day is a smile and a warm welcome from Cathy Grayell, the owner.  This is usually followed by a short conversation regarding the current goings on and any news worth sharing.  Cathy is always upbeat, and even looks the part of a health club owner.  She is fit, energetic, and is often found lifting weights or using other equipment.

There is more to Iron Works Fitness and Cathy Grayell than meets the eye. Fourteen years ago, Cathy was diagnosed with Multiple Sclerosis, a progressive disease that slowly eats away at the nervous system.  Cathy’s doctor predicted she would be in a wheelchair by the time she was 40.  She was also a mom with three young children to raise.  That was in 1992. Today, Cathy looks like a well-trained tri athlete.

Indirectly, Cathy credits her multiple sclerosis to opening her business. “Unless you are forced into new situations you might not do as much in life.  I probably wouldn’t have opened Iron Works unless I had already been pushed in different ways working with multiple sclerosis.”

“The concept behind Iron Works” says Cathy with an infectious smile, is “What kind of workout facility would you create in your own home if you had unlimited time, money, and space?” Another idea that helped form the approach of the facility was to allow 24 hour card key access.  “I’ve belonged to different clubs over the years” says Cathy, “And they always seemed to open too late, or close too early for my schedule.  If I did get in during regular hours, it always seemed that I had to rush to be done.”  The card key approach removes all those issues. “The members all really look after the place too,” she continues.  “They have taken ownership of the facility, which is great.  The members come in all ages shapes and sizes” she says proudly, “from elite cyclists to people in their late 60’s”.

Cathy loves talking about her relationship with members.  It is important to her that she knows the members, and she really enjoys connecting with them.  “I am kind of like a bartender sometimes” she says laughing.  “We talk about everything.”

It’s a whole different world for Cathy than in 1992.  At the time of her diagnosis, she was working a high stress job.  On her Doctor’s advice, she quit. At first, she listened to her doctors, rested most of the time, and took steroids.  Her physical condition worsened.  She had so little energy she could barely get up and take a shower without returning to bed. She admits it was very tough initially.  When she first heard the diagnosis, she “steam-rolled through things” to deal with it.

About this time something in Cathy changed.  She realized she had to take control of her own health, and it was a turning point in her life.  She told herself  “This is small-potatoes compared to raising three kids.”

She started exercising.  She started walking 5 minutes.  After some time, she increased to 10 minutes of walking.  She got to the point where she could walk easily for an hour.  She also started listening to her body during this period, and she says this was the start of her journey to wellness.   Believing that a healthy body and mind are synergistic, she enrolled at CU and finished her undergrad degree in English begun many years ago at Penn State.  Obtaining her degree in 2000 after six years of being a part-time student and full-time parent gave her an even greater sense of accomplishment, physically and psychologically.

Cathy has lived in Colorado since 1978 and in Boulder since 1990.  “Living in Boulder”, she says with an amused look on her face,” I had access to lots of alternative methods of treatment, and I tried everything.”  She is a firm believer in eating unprocessed food (this is her “medicine”) and being very tuned into her body.  She will still have flare-ups if she is too stressed or too tired.  She is a big believer in exercise, and credits this with her wellness.  She lifts weights three days a week and her current regimen includes a goal of participating in at least one century bike ride this summer and continuing to build her strength both on off the bike.

Cathy has a positive outlook on all aspects of her life. Her journey to wellness brought her an understanding of the importance of incorporating and maintaining fitness as paramount to coping with whatever life offers. Through the lessons she learned, and the many difficult tasks she faced, she also learned she had a great capacity to accomplish difficult goals.

She believes life has given her an opportunity to be available to people facing physical challenges, and she is eager to share this gift of fitness with others.  That is why Cathy can be found most days at Iron Works Fitness where she helps hundreds of members along their own path to wellness.

Iron Works Fitness is located at the corner of Yellow Pine and North Broadway, in the Holiday Project.  You can learn about their facility at www.ironworksfitness.net, or by calling Cathy at 303-539-9334.